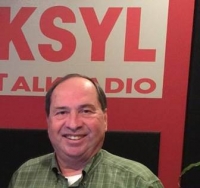 Jim Leggett is a nearly 40 year veteran of Louisiana print journalism, including over 25 years as a senior political columnist for The Town Talk. After moving to Alexandria with his wife of over 40 years, Babs in 1981, he has served as president of the Louisiana Press Club, president of the Kiwanis Club of Alexandria, as well as a former Lieutenant Governor of the organization. Jim is an avid proponent of the performing arts... Serving as secretary, and frequent actor in City Park Players. In addition to the show, Jim is currently the president of Greater Central Louisiana Association of Realtors. Jim is a veteran of the United States Army, serving in the 1st Armored Division in Vietnam. In his spare time, Jim enjoys playing with his dogs, serving as a eucharistic minister at St. James Episcopal Church, and volunteering for military causes, such as the “Apple Pie Brigade”.